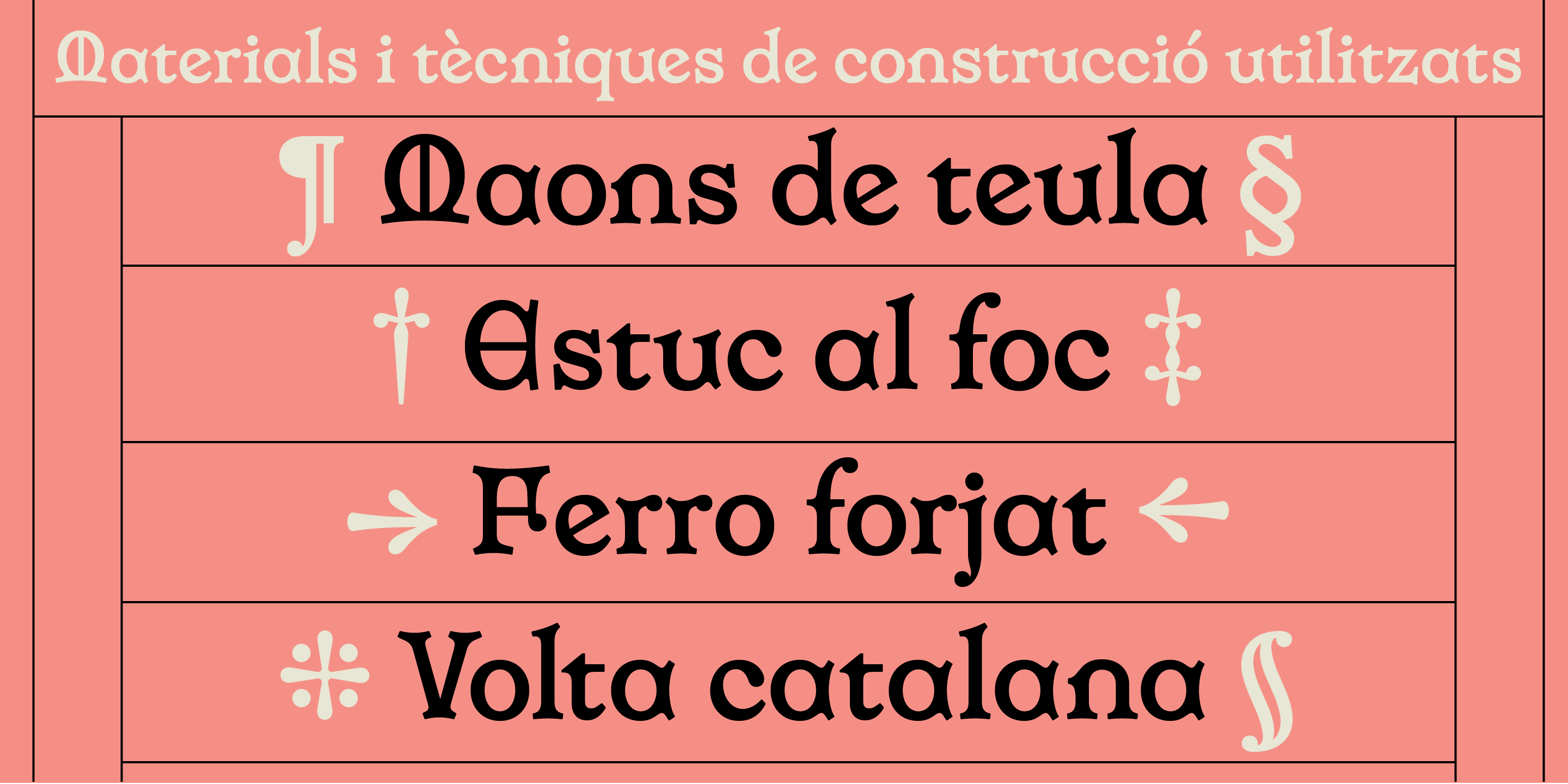 Gil Modern is named after Pau Gil i Serra, the patron of the Hospital de la Santa Creu i de Sant Pau in Barcelona, a masterpiece of ‘Modernisme català’, the Catalan Art Nouveau movement. A Catalan banker living in Paris, Pau Gil died in 1896. In his will he ordered the construction of a hospital to assist the poor. Thanks to his donation the complex of buildings was designed by the renowned Catalan architect Lluís Domènech i Montaner (1850-1923) and built from 1902–1930 in the El Guinardò neighbourhood of Barcelona.

Designed by Valerio Monopoli during the current pandemic, this refined typeface comes after an extensive analysis of the symbolic and cultural meaning of Domènech i Montaner’s stylistic choices in his work on the hospital.

Domènech and the Hospital of the Holy Cross and Saint Paul

Domènech designed the hospital according to the most innovative theories about physical and mental health of his times, so that patients could have the benefits of a constantly sunlit environment, with fresh air and comfortable, vast spaces for their convalescence. He devised a series of individual pavilions linked by basement passages, surrounded by gardens, and distributed on an area equivalent to nine blocks. A very modern concept that reflects a far-sighted perspective on the very present topics of ecological urbanism and health care.

The whole complex reveals Domènech’s interpretation of Modernisme with a wealth of inscriptions and decorative elements in stone, iron and ceramics.

Highly influenced by Catalan romanesque style, Domènech combines a rich variety of historically-derived elements characterised by the predominance of the curve over the straight line, the use of organic motifs, and a refined aestheticism. Domènech’s approach also applies to the capital letters P and G, initials of Pau Gil. He placed them in the arches of the main building’s facade and all around the hospital, hidden in the chimneys, sculpted on top of the towers, carved in the stone balustrades, and painted in the ceramics, as a celebration of the donor’s generosity.

Starting from those two letters P and G, Valerio Monopoli decided to design Gil Modern. The challenge was to extend the design features of these two letters throughout the whole alphabet. The uppercase was quite straightforward, he designed round Gothic capitals (also called ‘Lombardics’) a style where Domènech i Montaner sought inspiration for his P and G. For the lowercase letters Monopoli draws inspiration from both Domènech’s coeval modernist examples and typographic works, since the Catalan architect was also the author of many modernist magazine mastheads such as La Renaixença and La Veu de Catalunya.

Lombardic capitals seem to be an evolution of the uncial and then of the Romanesque letter. First used in northern Italy, they were developed by the scribes in different countries, eventually settling its peculiar forms within the 12th century. Gil Modern uppercase letters adopt three main design ideas which are peculiar of these letterforms as described in Nicolete Gray’s A history of lettering: ‘the idea of using the counter […] as a unit of construction; the idea of elongating the serif (thereby creating new counters); and the idea of making letters out of curves’. These capitals – which include notable letterforms like for instance closed C and E (which is rounded), round M and many others – are matched by a round and clear seriffed lowercase where some details of the capitals are harmoniously blended in the letterforms. Both cases in fact feature swashes and stroke endings with typewriter-ish drop terminals (such as in Q, R, P, r, æ, c, g, and also in 2, 3, 4). However, as Gil Modern’s letterforms are sometimes too extreme and too bizarre for ordinary typesetting today, several more customary alternate characters have been included in stylistic sets for both upper and lowercase.

The result is Gil Modern, a decorative typeface suitable for dropcaps and big titles (also for small-size typesetting, if you like), with Lombardic capitals and a readable lowercase. It holds a distinctive medieval feeling and an Art Nouveau flavour, while subtly communicating the sturdiness of post-industrial typefaces.