A flared sanserif with early-Renaissance inscriptional echoes, Franco Stone stands out for its lightness and strength, clarity and sophistication. Influenced by letter carving and inspired by the ‘Florentine letter’, incisive, thin and stylistically refined, it’s ideal for select applications that require a first-class touch 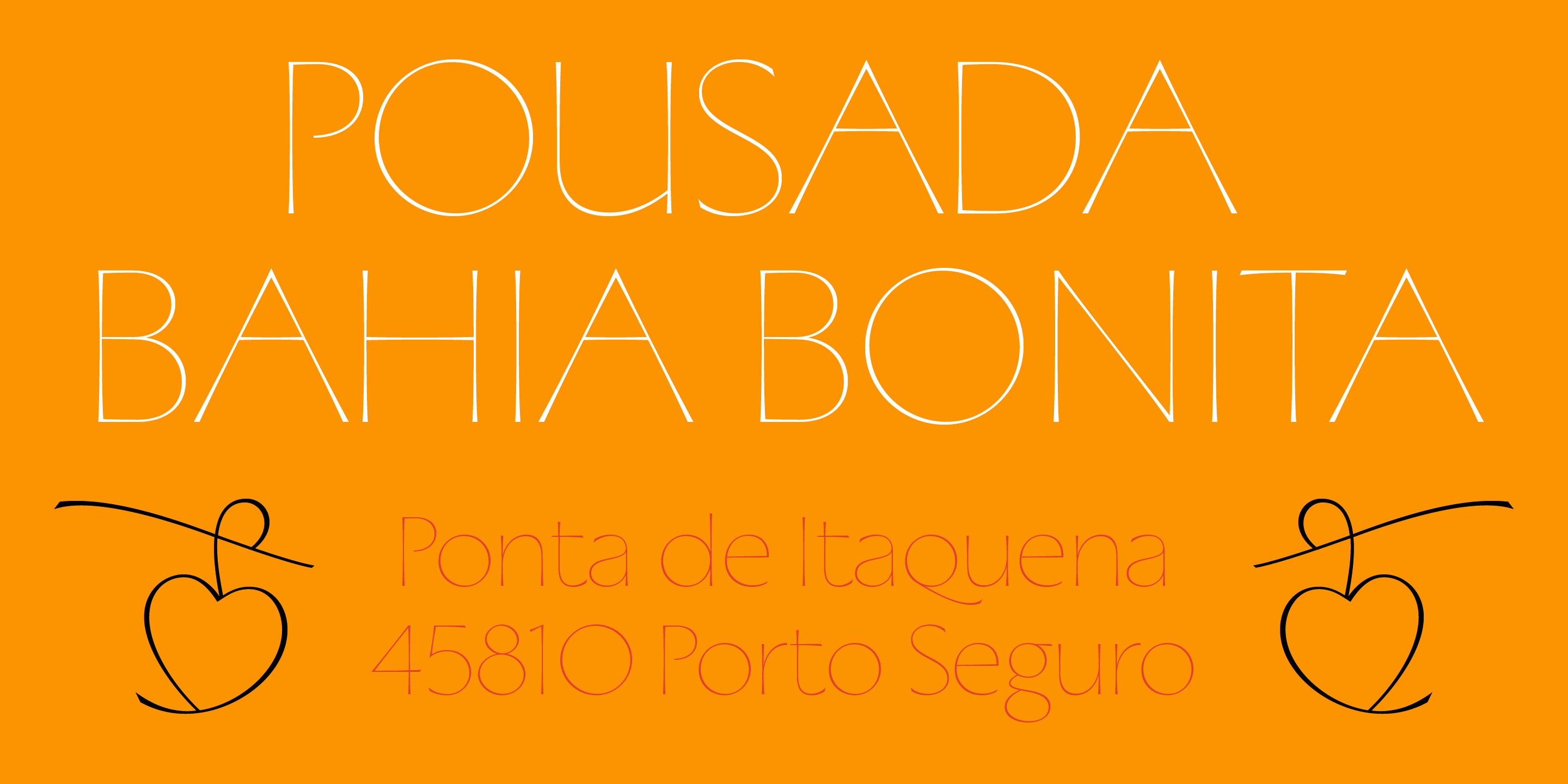 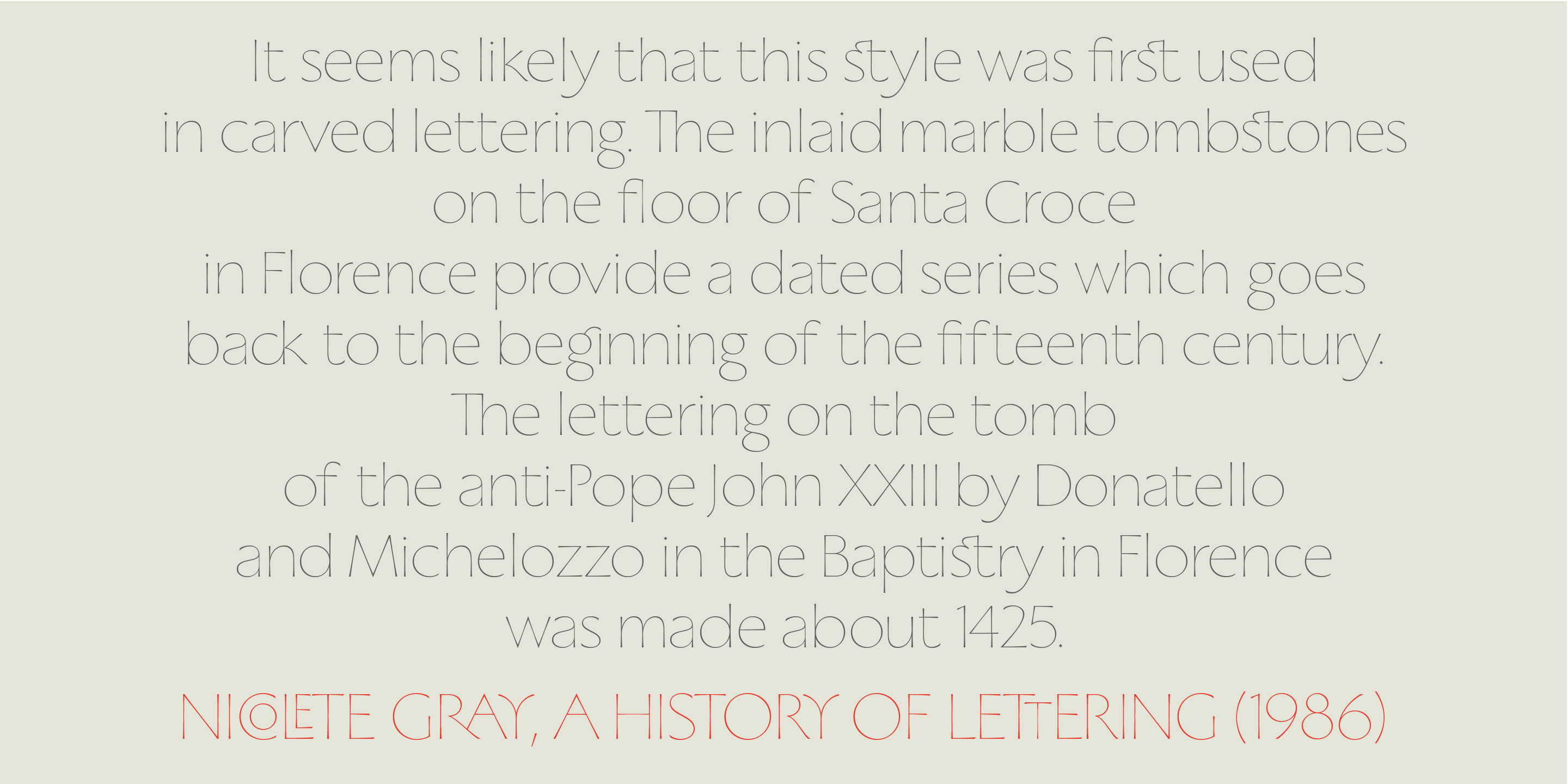 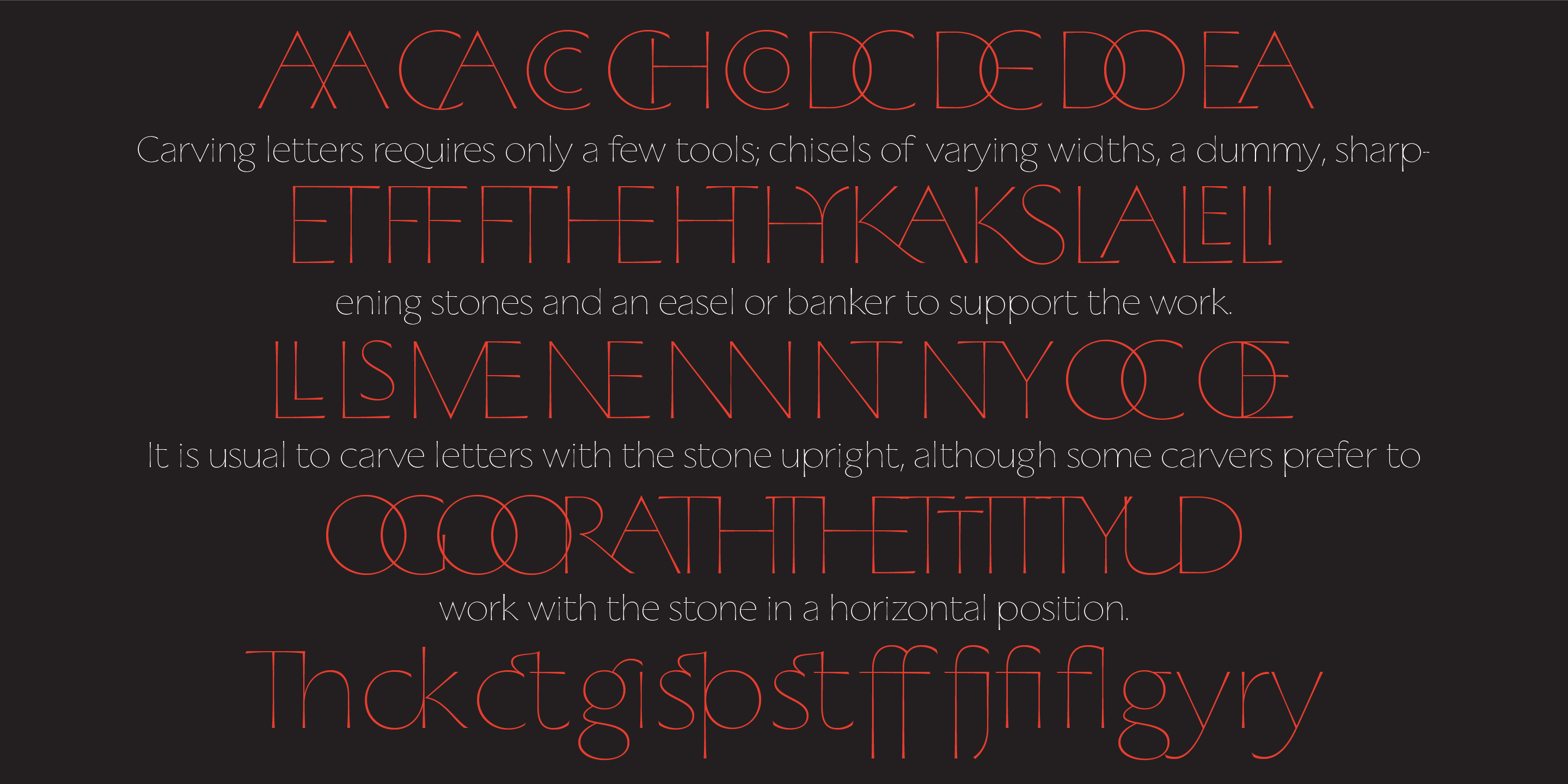 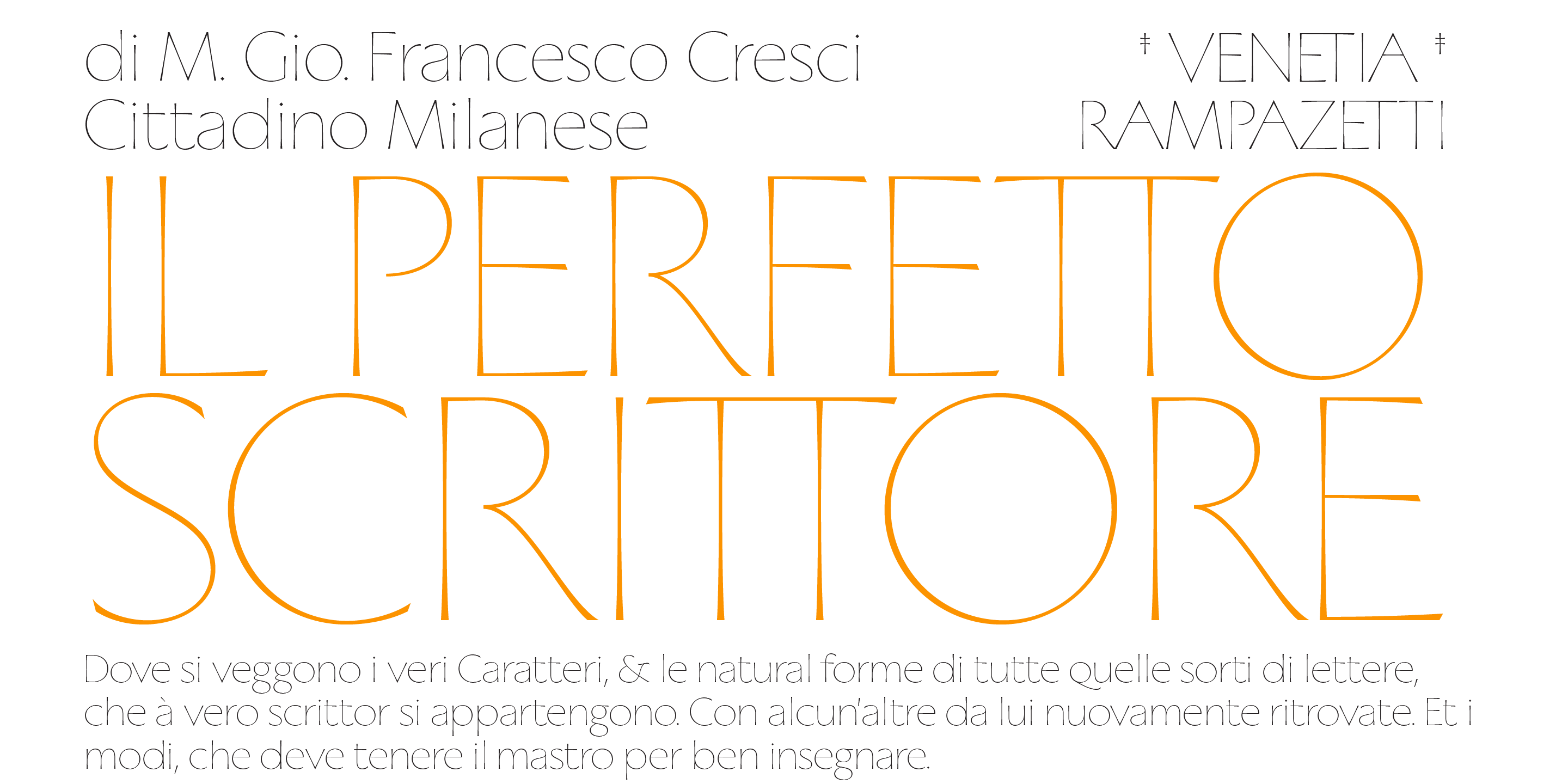 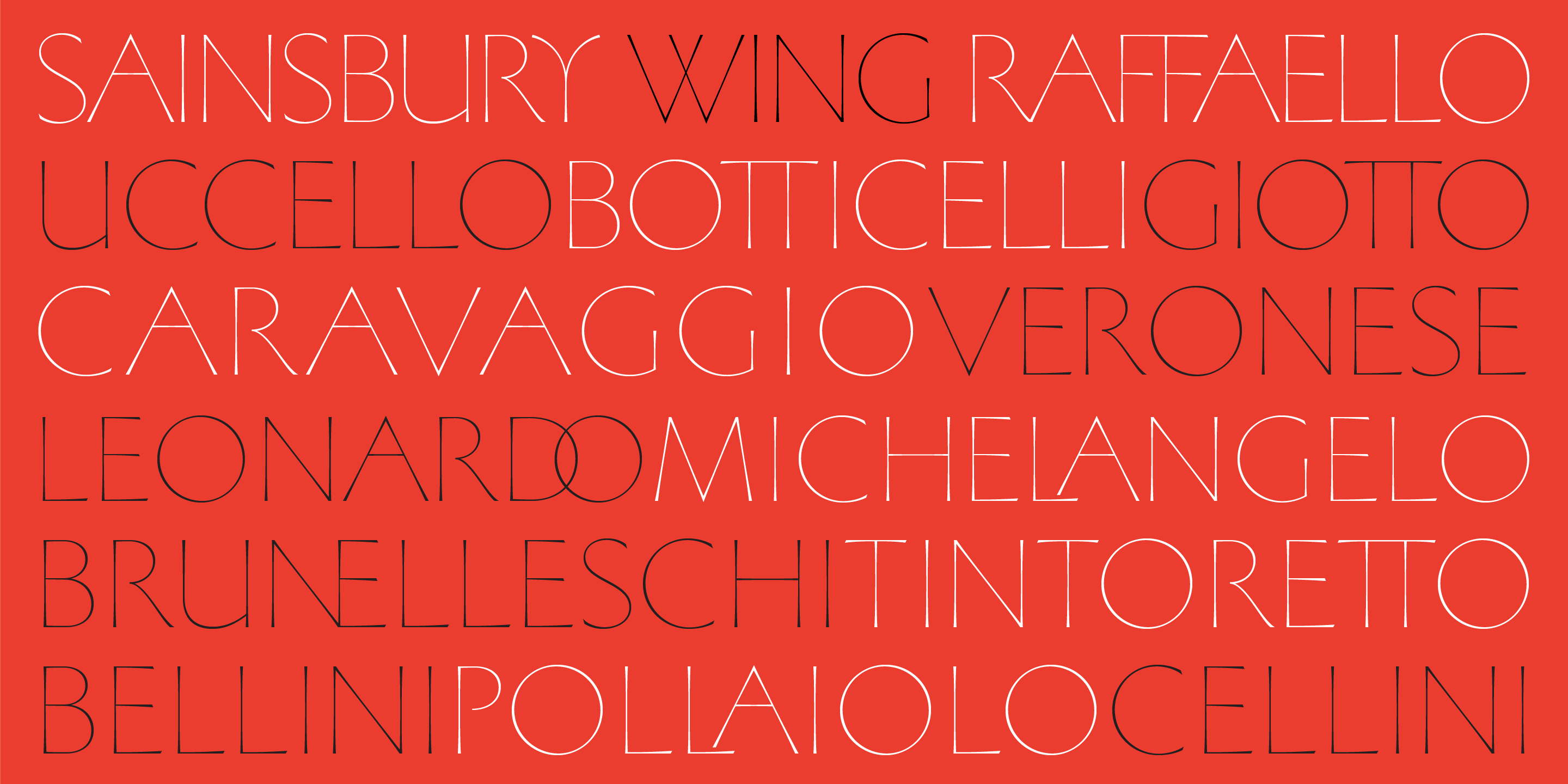 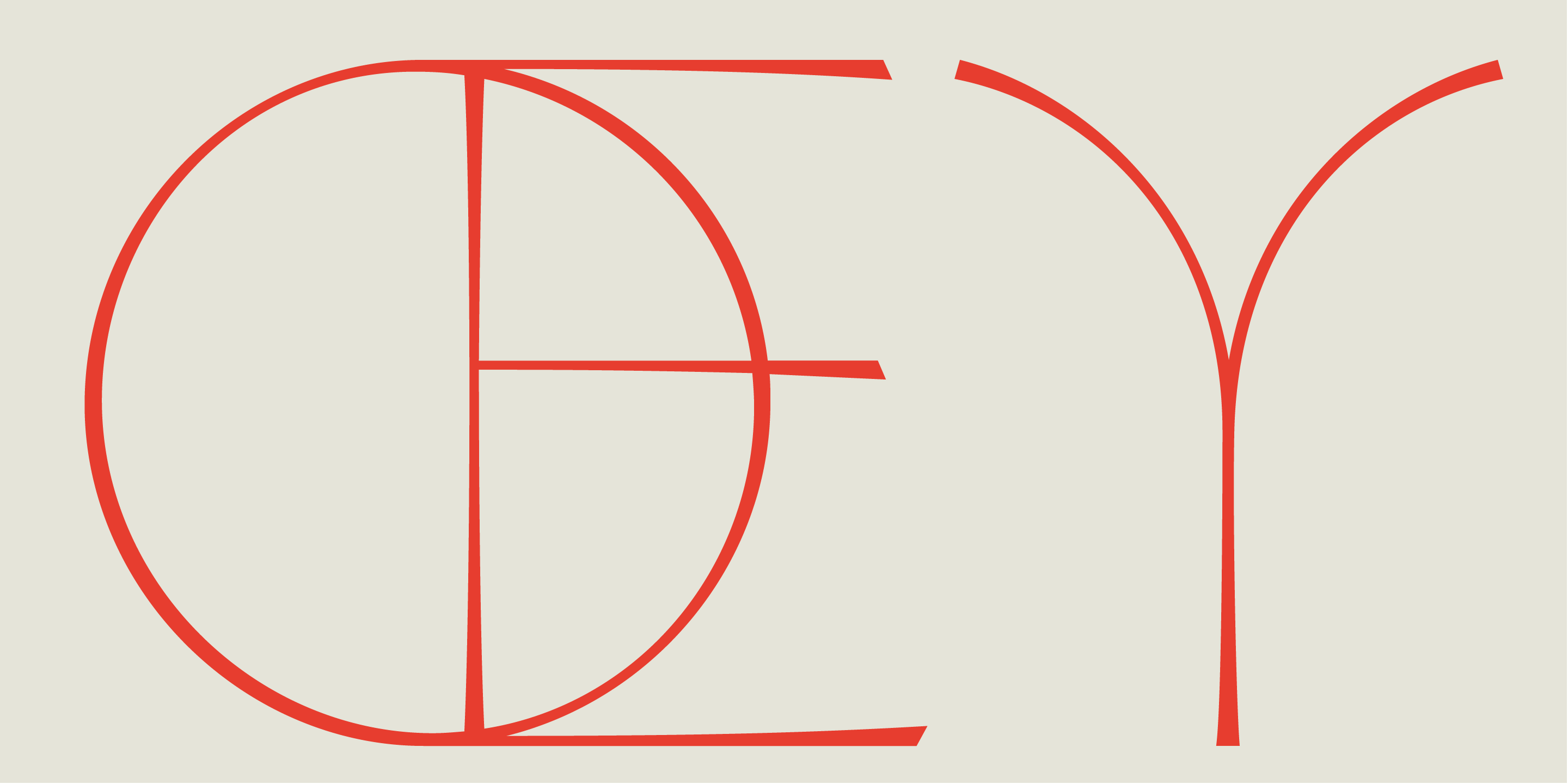 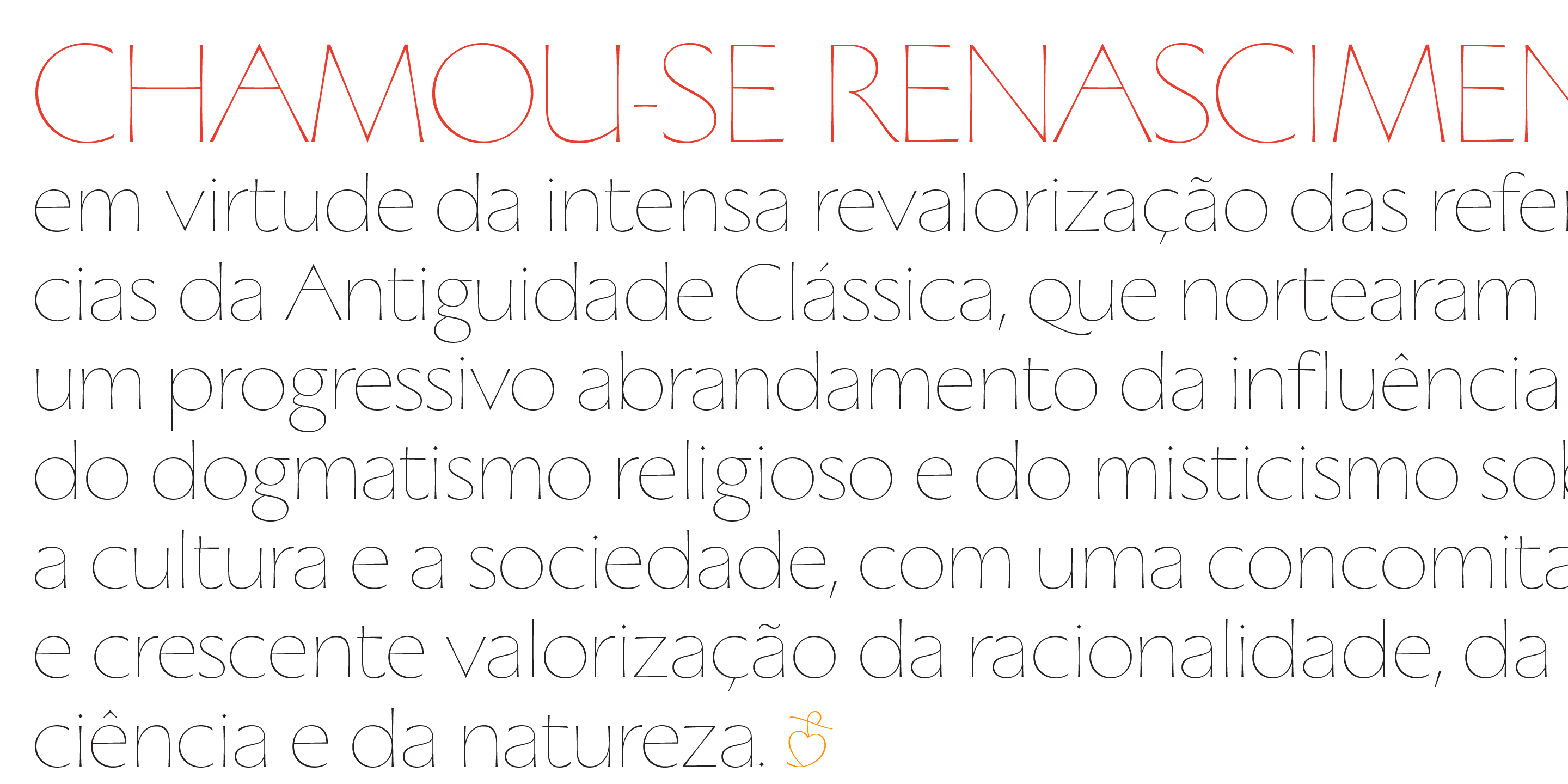 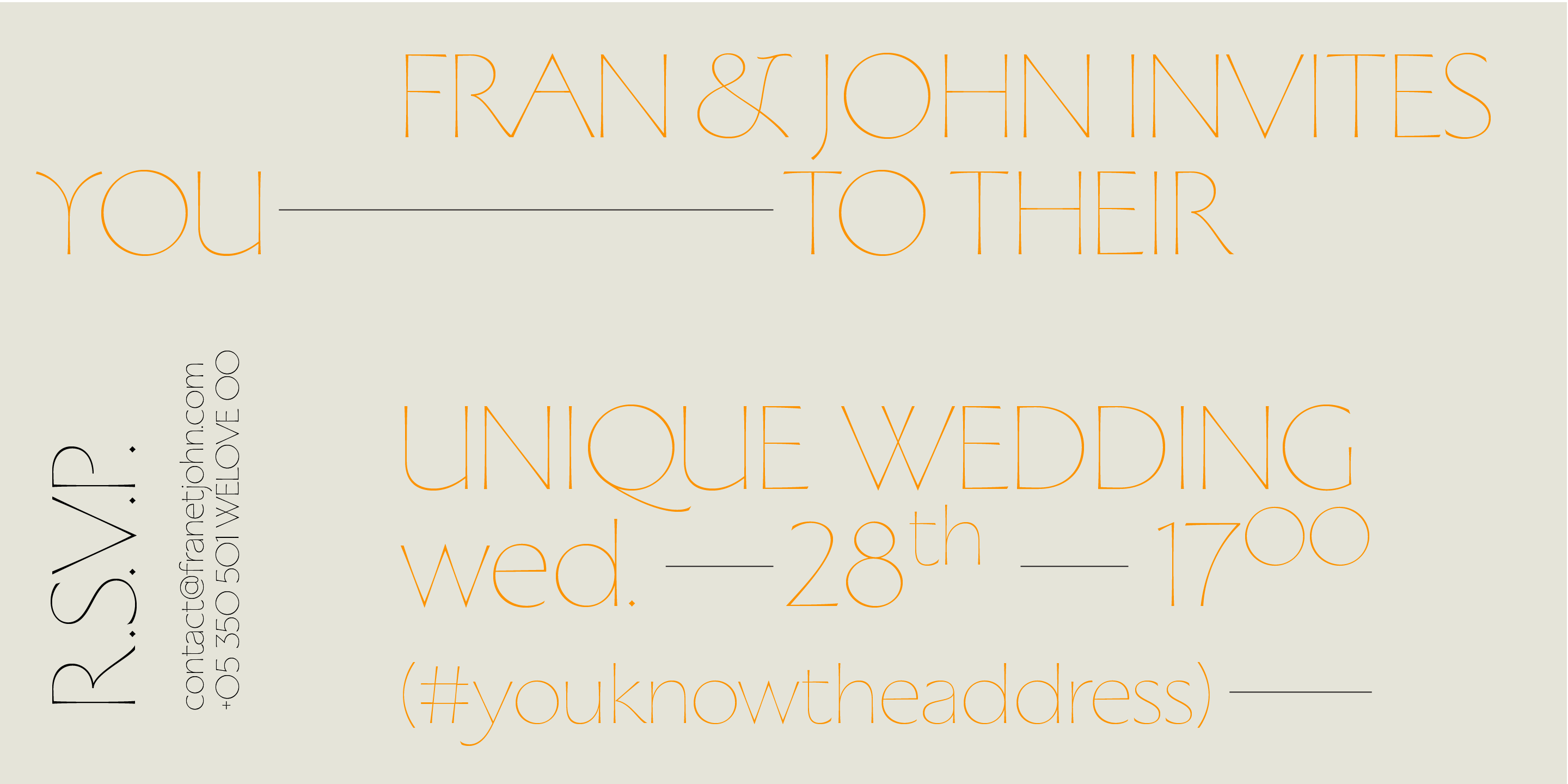 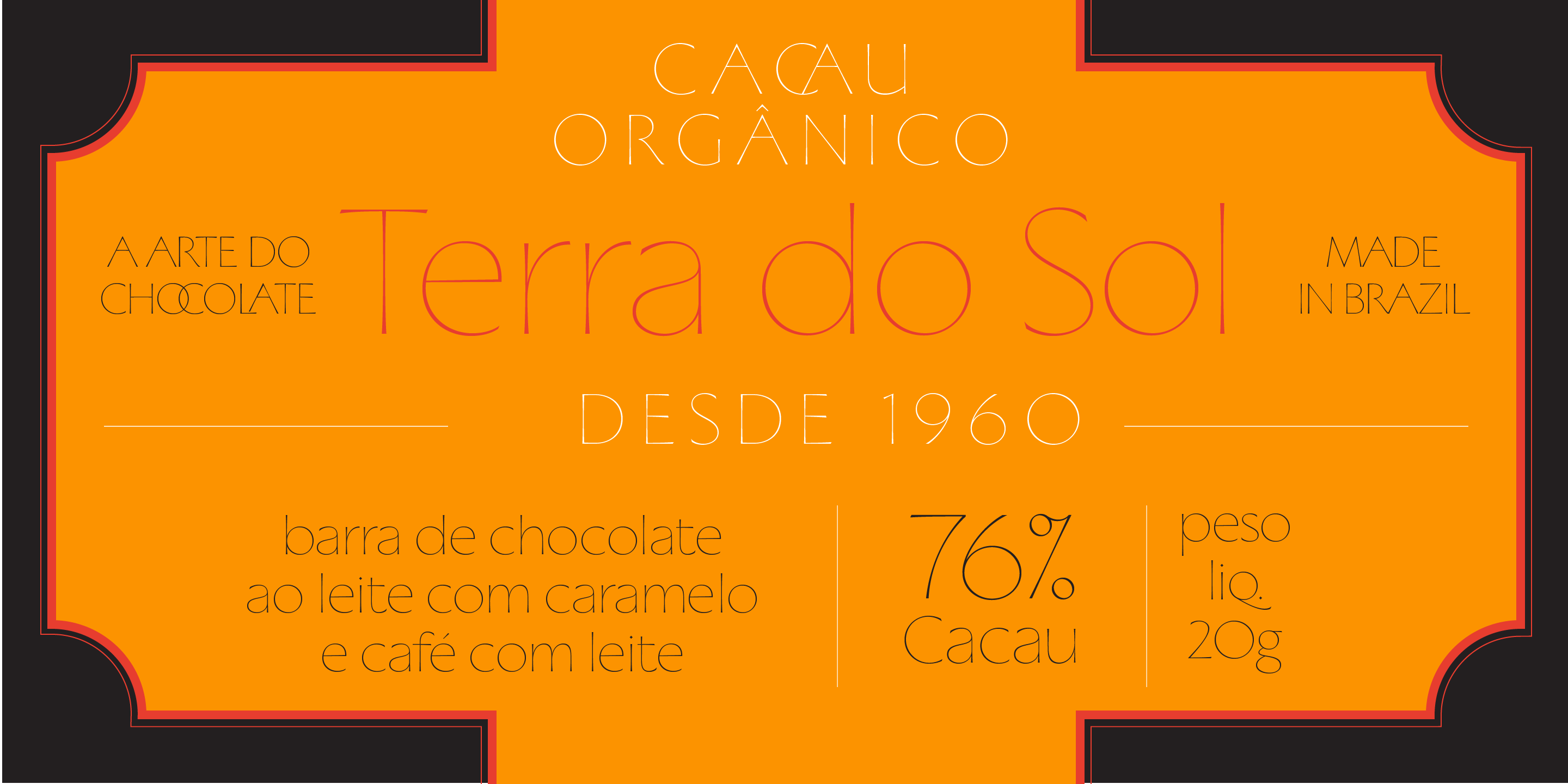 Wherever a display text must be assertive and the layout clear and elegant, you can trust Franco Stone. The proportions of its capitals vary greatly, letters such as B and E are very narrow while others like O and Q are perfect circles: the result is a typographic texture with a classical flavour and a strong, irregular rhythm. Franco Stone does not fully conform to sans serif principles with its flared serifs. Stems thicken towards terminals and the curves of S, C, and G swell into terminals that approximate serifs. So, we could consider it as a flared sans. The inscriptional essence of this elegant typeface did not stop its designer, Lucas Franco, from completing its character set with lowercase letters. Those letters, as we see in the f with its descending stroke and q with an uppercase-style tail, reference Renaissance calligraphic practice. Finally, Franco Stone includes a wide range of ligatures and nested ligatures inspired by Romanesque inscriptions that make it possible to recreate a beautiful style of lettering.

All in all, Franco Stone reminds us of an unmistakable style of letter seen in some early Renaissance inscriptions in Florence.

In ‘Sans Serif and other experimental inscribed lettering of the early Renaissance’ (Motif no. 5, 1960) Nicolete Gray observes how the evolution of the Renaissance letter as a revival of the Roman prototype was a gradual process lasting for the greater part of the 15th century.[*] In Florence, a style of light and delicate letterforms is preserved on monuments such as the Cantoria of Luca della Robbia (1438) and the tomb of the Beata Villana (1451). ‘These [letters],’ wrote Gray, ‘are of great interest and one can regard them as inventions in their own right, not just as steps towards a final rediscovery.’ Just ten years before Gray, in 1950, Hermann Zapf visited Santa Croce in Florence and sketched the inlaid marble stone letters on the tomb of Berto di Lionardo Berti (1430) – that was the beginning of his Optima, the acclaimed sans serif released by the Stempel foundry in 1958.

As well as Optima, Franco Stone shares much with the style of letters discussed by Gray. It follows the delicacy, sharpness and sense of primitive uncertainty expressed by early-Renaissance sans serif letterforms.

The central role of carved lettering

Another source of inspiration was the work of contemporary letter cutters like Michael Harvey. Particularly the letters Harvey carved in slate, where the fine-grained material and the contrast between the letters and their background encourage an exquisite lightness. Franco learned a clear lesson from Harvey: that we have forgotten how central carving is to the production of letters, all letters, even the ones we are reading now. It’s well known that Roman capitals are genetically inscriptional. Carved into stone around two thousand years ago, they survived to inspire Renaissance scholars, architects and printers and remain a source of study today. What we often forget is that lowercase letters are also the result of carving. On a smaller scale, of course, and so we use the term cutting, but steel punches – the foundation of present-day typefaces – were cut for centuries and are nothing if not miniature sculptures.

In classical inscriptions, the brush shaped the letter and the chisel tidied up the brush-written result, where necessary. Franco Stone combines forceful sculptural gestures with the fluid and sinuous strokes of the brush, producing a typeface that is at once imposing and harmonious.

*. Actually, we have to wait for the second part of the 16th century before Giovan Francesco Cresci and his follower Luca Orfei defined a more faithful revival of Roman Imperial letter. For more information see James Mosley, ‘Giovan Francesco Cresci and the baroque letter in Rome’, Typography papers, 6 (2005), pp. 115–55. Mosley’s classical essay ‘Trajan revived’ (Alphabet, 1964) was translated into Italian by Giovanni Lussu in ‘Traiano redivivo’ and included into the miscellany Radici della scrittura moderna (Stampa Alternativa, 2001). 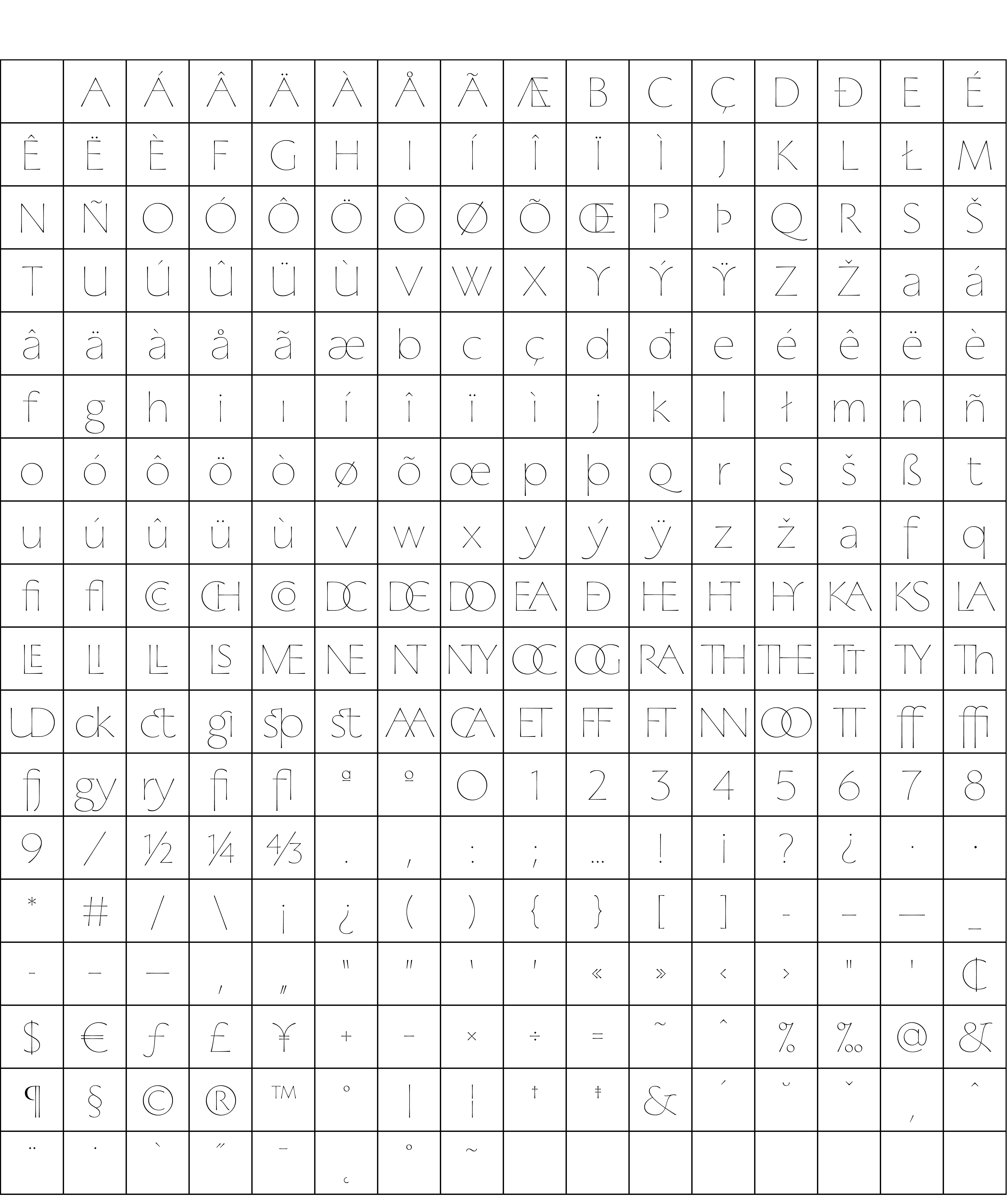